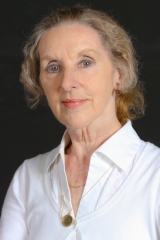 Riet Velthuisen is both the founder and director of the Continental Ballet Company. She is a native of Holland and has danced professionally with several European ballet companies, including the Dutch National Ballet. Riet studied classical ballet in Amsterdam, the Hague and Paris.

After working as ballet mistress in Memphis and Florida, she moved to the Twin Cities with her family. In 1987, she began teaching in Bloomington, and in 1988 formed the Continental Ballet Company.

Riet’s primary work is with the Company Dancers conducting all rehearsals and directing all productions. She passes on her European style which is evident in the dancers who have trained with her. On several occasions she has accompanied dancers to Holland to share her European heritage and training with them.

Riet has choreographed numerous ballets for the Company. These include Floret Silva, Proclamation, Classe de la Danse, Bonae Fortunae, Cinderella, and the Nutcracker. In addition, she has staged/choreographed Sleeping Beauty, Coppelia, Paquita, and Swan Lake.

Riet is also involved in community education by speaking in public schools for career days, physical fitness seminars, and arts education. Her love of classical ballet is evident in all her work; whether she is speaking, teaching, or choreographing.

Genevieve “Jenny” Spooner is the Assistant Director for Continental Ballet Company.   She works closely with the Director to administer the daily operations of the Company.  Jenny writes and researches grants, seeks out new sponsors, maintains relationships with current sponsors, writes press releases, and was integral in the development of the Bloomington Center for the Arts (completed in 2003) Jenny currently serves as Vice President for the Bloomington Fine Arts Council.  She regularly attends workshops on nonprofit management and grant writing, to refine her skills in this area.

Jenny also has a background in dance having studied and performed with the Andahazy Ballet Company where she was in major productions such as Giselle, Les Sylphides, Scheherazade, Los Seises, and Miraculous Stag.  She also participated in numerous lecture demonstrations and smaller performances.  After completing a pedagogy class taught by Lorand and Anna Andahazy, Jenny joined the teaching staff at Andahazy Ballet Company.  She later taught for Continental Ballet Company until 1999, then focused her time on administrative duties.

Along with being an integral part of the studio, student enrollment, and the box office, Alicia has taught levels Pre-Ballet, Ballet 1, Ballet 3, been an Assistant Teacher, and a substitute teacher, along with other roles.

In her dance education and performance experience, Alicia earned a Bachelor of Fine Arts Degree from the Dance program at Stephens College in Columbia, Missouri.  She trained primarily in ballet and modern, as well as studied musical theater, and several world dances. Alicia took part in the department’s many dance performances annually, in addition to choreographing.

Prior to her dance involvement and awards throughout high school (at Stoneleigh-Burnham School in Massachusetts), she trained at Ballet Arts Minnesota in ballet, pointe, and modern dance. Each year she performed in showcases like their annual City Children’s Nutcracker production.  Alicia has also performed with the Dance Theatre of Harlem in Donald Byrd’s Nutcracker, in Minneapolis.

Some of Alicia’s other work experiences include working with students in Saint Paul Public Schools.  She’s been with CBC since 2011.

Her complete bio will be posted shortly!

Riet is the founder and director of the Company and serves on the board of directors.

Mary Vasaly has been a member of the board of Continental Ballet Company for more than 20 years. She is currently a Minnesota trial court judge.  Before her appointment to the bench, she practiced law for more than 25 years with Maslon Edelman Borman & Brand, LLP, in Minneapolis, where she was a partner in the litigation group.  She is also a long-time participant in Continental’s dance classes, and has danced with the Company in a number of Continental’s professional productions.  As a board member, Mary has worked to preserve Continental’s tradition of bringing classical ballet to the community and Bloomington and through out the state.

Anne Ericson Burns has had the privilege of serving on the Continental Ballet board of directors since June 2004. She has had the opportunity to watch the company grow and establish a strong presence in the community. Anne has enjoyed helping with fundraisers for the company including the annual Nutcracker Tea and the Taste of Chocolate. A lifelong love of classical ballet has led Anne to being involved continually with ballet.  The Minnesota Dance Theater was the first exposure she had to ballet classes; she then danced with the Branitski Ballet Company for several years. Anne also had the opportunity to choreograph high school musical productions; she found it great fun to teach young people who had never danced to learn to waltz in “Oklahoma” or skip down the “yellow brickroad”. In the 1990’s Anne and her three children continued their training with Continental Ballet. Her two daughters performed with the company for many Nutcracker seasons. Not only is Anne interested in dance but also in other art forms. She is a member of the Edina Art Center and has been enrolled in pottery classes for many years. The challenge of always learning and creating is a wonderful thing for the mind and body. Anne currently is employed at West Health in the imaging department.

Dancing since the age of two, Kim’s mother instilled a love of ballet at an early age.  She trained in Michigan, Florida and was a member of Continental’s ballet company when it began in 1988. Kim has danced in the Nutcracker, Giselle, Coppelia, Peter and the Wolf and other various original works choreographed by Riet. While not in the Company any longer, Kim still takes classes at Continental.   At age 12, Kim started Figure Skating and skated through college at the University of Minnesota, picking the sport back up in 1995. She is presently skating with the Minnetonka Figure Skating Club working on her Adult Gold FS test. Currently a member of the Bloomington Medalist Concert Band and the professional flute ensemble Silver Strings, Kim has been playing flute since the age of 11.  She brings her love of music and dance experience to the Continental Board where she has been serving on since 2002. Kim currently works at Park Nicollet Health Services as a HR Information System’s Team Lead and resides in Crystal with her husband Steve Belzer.

Heather Shafland has had the honor of serving on the Continental Ballet board of directors since June 2015. Along with being elected secretary on the board, Heather has also been emcee at various performances the company has held since joining. She is currently Sales Operations Manager for Cyber Power Systems (USA), Inc. in Shakopee, MN. In her free time, she enjoys supporting all of the arts within the community. From classical music to traditional ballet, she longs to keep the traditions alive and growing within our local community and throughout the state.

As principal of AD Marketing, Amy provides marketing strategy and expertise to organizations. She has worked for corporations, startups, and agencies including UnitedHealth Group, 3M, and Harley-Davidson. Amy received her undergraduate degree from St. Norbert College in De Pere, WI and Master’s of Business Administration from Loyola University of Chicago. She danced professionally in Chicago with the Boitsov Ballet Company, in Les Sylphide, Pinocchio, Swan Lake, Raymonda and Carmen. Amy joined Continental Ballet Company in 2004 and has performed Cinderella, Nutcracker, Sleeping Beauty, and Swan Lake. Amy actively volunteers with Rotary and her children’s school. She is a mother to three boys and has many adventures with her family skiing, sailing, swimming and Lego building.

Genevieve Spooner is the Assistant Director for Continental Ballet Company. On the board she serves as treasurer.