All choreography and staging by Director Riet Velthuisen 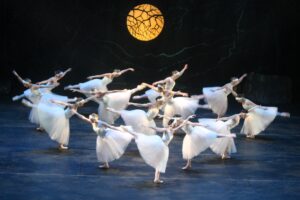 Swan Lake is one of the most beloved of classical ballets.   The ballet is set to the beautiful music by Tchaikovsky.  Director/Founder Riet Velthuisen has re-staged this ballet to fit into a two hour format.  Complete with beautiful costumes and sets, this full-length production is a feast for the eyes.  The story of Swan Lake begins at a birthday celebration for Prince Siegfried.  The Queen asks her son to choose a bride from among the guests.   The Prince cannot decide so instead he goes hunting with his new crossbow.  While hunting he is bewitched by the beauty of a flock of swans.  He encounters a beautiful maiden dancing by a pond at night.  The maiden is Odette, who was cursed by an evil sorcerer to be a human by night, and a swan by day.  Siegfried falls in love with Odette and promises to rescue her and marry her.  Shortly afterwards, Siegfried is attending a ball and in walks the sorcerer’s daughter, Odile, dressed as a black swan and looking exactly like Princess Odette.  Odile, is also in love with the Prince and with her father’s help, gets Siegfried to pledge to marry her.  Odette hears of this, is heartbroken and runs off.  The Prince runs to find her and…..well to find out the ending, you will have to come to the ballet! 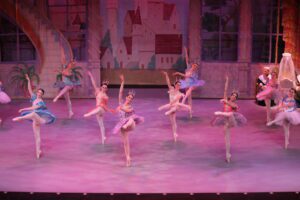 The ballet Sleeping Beauty has been staged by Riet Velthuisen using the original music by Tchaikovsky and the addition of some of Mrs. Velthuisen’s original choreography.  In this classic children’s fairy tale Princess Aurora has a spell cast on her that has puts her to sleep for 100 years.  She can only be awakened by a kiss from her true love.   The ballet will show the celebration on her awakening.    As one can imagine, special guests will be invited to the castle to celebrate this joyous occasion.    Traditional fairy tale characters such as Puss and Boots and Little Red Riding Hood are among the guests. 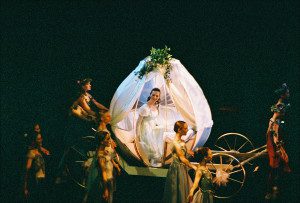 This is the classic fairy tale, touching and hilarious.  Cinderella and her Prince make a heart-warming dream come true while the hilarious stepfamily inspires nonstop laughter.  New costumes and sets and a tuneful original compilation of music by Rossini make this bright new production an irresistible family favorite. 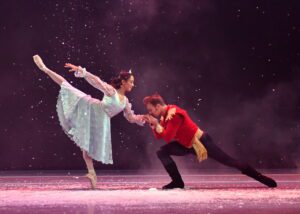 The Holiday Season crown jewel!  Especially designed for families, this seasoned production develops themes of generosity, non-violence, and responsibility through the timeless tale of Clara’s fantastic voyage to the Land of the Sugarplum Fairy with her magical godfather Drosselmeyer.  The Continental Ballet Company’s Nutcracker has toured throughout Minnesota. 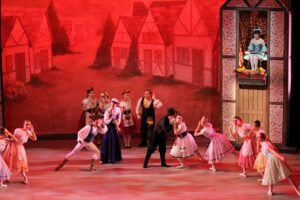 Coppelia is the story of a doll-maker who tries to bring a beautiful doll to life.   The villagers discover this and a live girl dresses as the doll to play a trick on the doll-maker.   This ballet mixes razor-sharp story-mime with bravura classical dance.  It is a wonderful ballet for families and people of all ages. 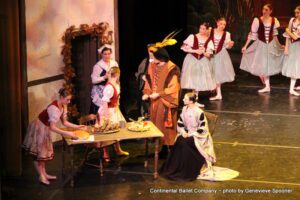 This is one of the most beloved of the great romantic ballets. The second act, with the corps as dancing spirits, is often referred to as a “white ballet.” The ballet tells the story of a lovely peasant girl named Giselle who has a passion for dancing, and when she finds out the man she loves is engaged to someone else she dies of a broken heart. In CBC’s version, her great love saves the life of her true love, Albrecht. 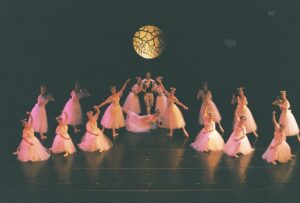 Les Sylphides, a one-act romantic reverie, is a plotless work in which a poet dances with ghostly sylphs in a forest. The corps de ballet is on stage almost throughout, used in decorative groups when not actually dancing. The ballet is in the repertory of nearly every company in the world.

In Latin, Bonae Fortunae means good fortune. What an appropriate name for this ballet! Riet Velthuisen choreographed this ballet to reflect her joy, honor and excitement in moving to Bloomington’s Center for the Arts. The dancing is very precise, with quick movements and long graceful lines. Riet hopes the choreography expresses celebration of our “Bonae Fortunae”. 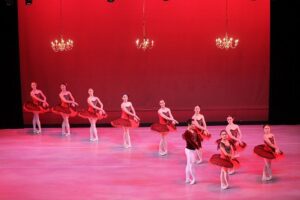 Paquita is one of the most celebrated displays of technical fireworks from the old Imperial Russian Ballet. It was originally staged by Marius Petipa at the Paris Opera in 1846 and is embraced by many professional companies as a showcase for the grand classical style of Petipa’s choreography. Paquita is the story of a well-born young Spanish girl who is stolen by a band of gypsies and tells of her adventures before she is reunited with her family at a grand ball.   Most ballet companies perform the variations from Paquita rather than the full-length ballet.

PETER AND THE WOLF (30 minutes) 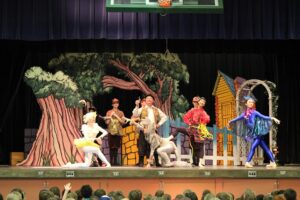 Well-suited to repertory evenings and school or community mini-performances, this version features a new twist on the ending.  Instead of killing the wolf, Peter and the Hunters capture it and carry it off to the zoo.  A staple of Continental Ballet Company’s school residency work, this fable featuring a bird, a cat, a duck and a wolf has delighted children and adults alike throughout Minnesota.

CARNIVAL OF THE ANIMALS

Camille Saint-Saëns composed the music and Ogden Nash wrote the poem. The animals are having a carnival, and the guests are arriving. There’s the majestic lion, the braying mules, the dancing elephant, and the bouncy kangaroos.   This ballet also includes the beautiful solo for the Dying Swan. 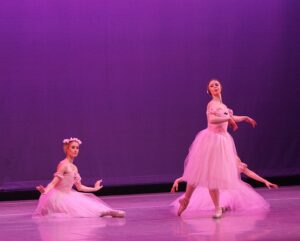 It was the Idea of Mr. Benjamin Lumley, manager of her Majesty’s Theatre in London, to stage a grand divertissement bringing together the four greatest ballerinas of the Romantic Age.  Through the most delicate diplomacy, he managed to call the celebrated ladies to London, not however without several “artistic misunderstandings.”  One of these as the choice of who was to receive the favored last variation, each lady certain of her own supremacy. 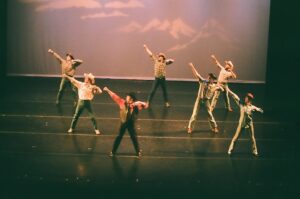 The barn-burning Hoedown from Rodeo never fails to lift audiences from their seats, while the flirtatious Saturday Night Waltz captures a slice of Americana.  These twentieth-century evocations of America’s cowboy heritage contract deliciously with Classe de Danse, an exquisite turn-of-the-last-century miniature inspired by the ballet paintings of Edgar Degas.

Individual works from the extended repertoire may be combined to create a smorgasbord of exciting and lyric classical ballet.  Possibilities may include pas de deux and divertissements from Coppelia or Cinderella, selections from The Nutcracker (in season) and miscellaneous short works.  Check with Continental Ballet for currently available works.